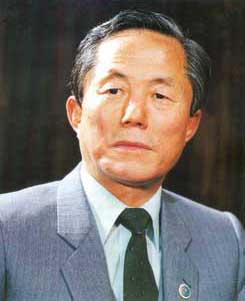 General Choi Hong Hi - the legend - founder of probably the most popular martial art the world has ever known. He was an inspiration to all those who come in to contact with him, either in person or through his books.

Below is a brief biography.


First of all, it must be said about General Choi, that he gave so much devotion to this art, that the man, his life and his work were one. He developed and brought the little-known ancient genre up-to-date through the long years of assiduous, zealous application and firm resolution. If Taekwon-Do today has gained international status, it is because of the tireless efforts of one man -- the father of modern Taekwon-Do.

General Choi Hong Hi was born on November 9th, 1918 in the rugged and harsh area of Hwa Dae, Myong Chun District in what is now D.P.R of Korea. In his youth, he was frail and quite sickly, a constant source of worry for his parents.

Even at an early age, however, the future general showed a strong and independent spirit. At the age of twelve he was expelled from school for agitating against the Japanese authorities who were in control of Korea. This was the beginning of what would be a long association with the Kwang Ju Students&#8217; Independence Movement.

After his expulsion, young Choi&#8217;s father sent him to study calligraphy under one of the most famous teachers in Korea, Mr. Han II Dong. Han, in addition to his skills as a calligrapher, was also a master of Taek Kyon, the ancient Korean art of foot fighting. The teacher, concerned over the frail condition of his new student, began teaching him the rigorous exercises of Taek Kyon to help build up his body.

In 1937, Choi was sent to Japan to further his education. Shortly before leaving, however, the youth had the misfortune to engage in a rather heated argument with a massive professional wrestler who promised to literally tear the youth limb from limb at their next encounter. This threat seemed to give a new impetus to young Choi&#8217;s training in the martial arts.

In Kyoto, Choi met a fellow Korean, Mr. Him, who was engaged in teaching the Japanese martial art, Karate. With two years of concentrated training, Choi attained the rank of first degree black belt. These techniques, together with Taek Kyon (foot techniques), were the forerunners of modern Taekwon-Do.

There followed a period of both mental and physical training, preparatory school, high school, and finally the University in Tokyo. During this time, training and experimentation in his new fighting techniques were intensified until, with attainment of his second degree black belt, he began teaching at a YMCA in Tokyo, Japan.

Choi recounted a particular experience from this period of time. There was no lamp-post in the city that he didn&#8217;t strike or kick to see if the copper wires ahead were vibrating in protest.

"I would imagine that these were the techniques I would use to defend myself against the wrestler, Mr. Hu if he did attempt to carry out his promise to tear me limb from limb when I eventually returned to Korea."

With the outbreak of World War II, he was forced to enlist in the Japanese army through no volition of his own. While at his post in Pyongyang, North Korea, he was implicated as the planner of the Korean Independence Movement and interned at a Japanese prison during his eight month pretrial examination.

While in prison, to alleviate the boredom and keep physically fit, Choi began practicing this art in the solitude of his cell. In a short time, his cellmate and jailer became students of his. Eventually, the whole prison courtyard became one gigantic gymnasium.

The liberation in August 1945 spared Choi from an imposed seven year prison sentence. Following his release, the ex-prisoner journeyed to Seoul where he organized a student soldier&#8217;s party. In January of the following year, Choi was commissioned as a second lieutenant in the new south Korean army, the "Launching Pad" for putting Taekwon-Do into a new orbit.

Soon after, he made company commander in Kwang-Ju where the young second lieutenant lighted the torch of this art by teaching his entire company and was then promoted to first lieutenant and transferred to Tae Jon in charge of the Second Infantry Regiment. While at his new post, Choi began spreading the art not only to Korean soldiers but also to the Americans stationed there. This was the first introduction to Americans of what would eventually become known as Taekwon-Do.

1947 was a year of fast promotion. Choi was promoted to captain and then major. In 1948, he was posted to Seoul as the head of logistics and became Taekwon-Do instructor for the American Military Police School there. In late 1948, Choi became a lieutenant colonel. In 1949, Choi was promoted to full colonel and visited the United States for the first time, attending the Fort Riley Ground General School. While there, this art was introduced to the American public. And in 1951, brigadier general. During this time, he organized the Ground General School in Pusan as Assistant Commandant and Chief of the Academic Department. Choi was appointed as Chief of Staff of the First Corps in 1952 and was responsible for briefing General MacArthur during the latter&#8217;s visits to Kang Nung. At the time of armistice, Choi was in command of the 5th Infantry Division.

The year 1953 was an eventful one for the General, in both his military career and in the progress of the new martial art. He became the author of the first authoritative book on military intelligence in Korea. He organized and activated the crack 29th Infantry Division at Cheju Island, which eventually became the spearhead of Taekwon-Do in the military and established the Oh Do Kwan (Gym of My Way) where he succeeded not only in training the cadre instructors for the entire military but also developing the Taek Kyon and Karate techniques into a modern system of Taekwon-Do, with the help of Mr. Nam Tae Hi, his right hand man in 1954.

In the latter part of that year, he commanded Chong Do Kwan (Gym of the Blue Wave), the largest civilian gym in Korea; Choi was also promoted to major general.

Technically, 1955 signaled the beginning of Taekwon-Do as a formally recognized art in Korea. During that year, a special board was formed which included leading master instructors, historians, and prominent leaders of society. A number of names for the new martial art were submitted. On the 11th of April, the board summoned by Gen. Choi, decided on the name of Taekwon-Do which had been submitted by him. This single unified name of Taekwon-Do replaced the different and confusing terms; Dang Soo, Gong Soo, Taek Kyon, Kwon Bup, etc.

In 1959, Taekwon-Do spread beyond its national boundaries. The father of Taekwon-Do and nineteen of his top black belt holders toured the Far East. The tour was a major success, astounding all spectators with the excellence of the Taekwon-Do techniques. Many of these black belt holders such as Nam Tae Hi, President of the Asia Taekwon-Do Federation; Colonel Ko Jae Chun, the 5th Chief of Taekwon-Do instructors in Vietnam; Colonel Baek Joon Gi, the 2nd Chief instructor in Vietnam; Brigadier Gen. Woo Jong Lim; Mr. Han Cha Kyo, the Head Instructor in Singapore and Mr. Cha Soo Young, presently an international instructor in Washington D.C. eventually went on to spread the art to the world.

In 1966, the dream of the sickly young student of calligraphy, who rose to Ambassador and the Association President of the most respected martial art in the world came true. On the 22nd of March, the International Taekwon-Do Federation was formed with associations in Vietnam, Malaysia, Singapore, West Germany, the United States, Turkey, Italy, Arab Republic of Egypt and Korea.

It is hoped that all instructors will follow his example by devoting part of their time towards introducing the art into the school systems in their respective areas.

Merely introducing the art, however, is not enough. The instructor must also concern himself with imbuing and maintaining a positive influence that will eventually serve as a guiding light to all students. Then and only then, can the instructor consider himself an apostle of Taekwon-Do.